FSH DIRECT uses Novec ™ 1230 because of its unique clean agent properties these include:

Novec ™ 1230
The Novec™ 1230 extinguishing gas (liquid) from 3M™ used by FSH DIRECT works on energy extraction from the source of the fire. This extraction of heat from the source of the fire is achieved by molecular enlargement, resulting in an oxygen deficiency in the flame. This effect is also called negative catalytic. A separation therefore takes place in the chemical reaction between combustible material and oxygen.
Novec ™ 1230 liquid extinguishes a fire before it begins by quickly removing heat. In a typical “total flooding system”, the agent is stored as a liquid in cylinders that are under pressure with nitrogen. By mechanical or electrical activation upon detection of a fire, the extinguishing process will take place when the fire is still in its initial phase and is extinguished in seconds.

The Novec™ 1230 liquid evaporates 50 times faster than water. In fact, you could soak a stack of paper in a Novec ™ 1230 liquid bath and pick it up again within a minute and it will be dry.

The video below shows how in most cases an extinguishing gas system is projected and mounted in a server room.

The following video shows how Novec ™ 1230 extinguishes a flame.

The video below shows that although Novec ™ 1230 looks like water it does not have the same properties as water. Novec ™ 1230 is non-conductive and does not harm your sensitive electronic equipment.

The following video shows that Novec™ 1230 does not damage paper or cardboard compared to water. 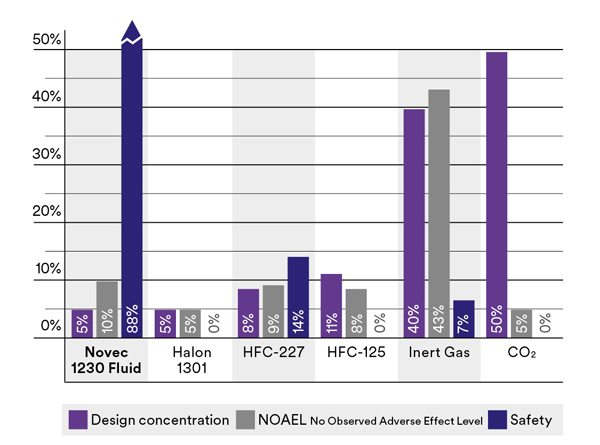 From: 3M the Netherlands