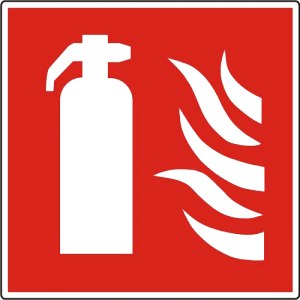 The following is a list of commonly used extinguishing agents:

Water: A cheap product with a large cooling effect and (with a hose reel or sprinkler) an almost unlimited supply.

Disadvantages: sensitive to frost and water can be dangerous when used on burning gasoline or oil. Equipment under electrical voltage can also present a hazard if water is used as an extinguishing agent.

A major disadvantage of a powder extinguisher is the large collateral damage to electronic equipment and the chance of re-ignition of the fire if extinguishing isn’t effective. When extinguishing with a powder extinguisher, the remaining powder must be removed with an industrial vacuum cleaner not water. The powder can cause nauseating side effects if its inhaled or swallowed and is an irritant if it comes in contact to eyes/skin.

Carbon dioxide (CO2):
These extinguishers can be recognized immediately because they have a black expansion tube or snow tube at the end of the hose. There is a handle between the expansion tube and hose that must be held while using the extinguisher. The handle is needed because the end of the unprotected tube becomes very cold (up to about −80 ° C) and one can incur third-degree burns due to this extreme cold.

Halons:
From January 1, 2004, the use and possession of halons in fire extinguishers and fire protection systems is prohibited in the Netherlands and Belgium, with a few exceptions for remaining for critical applications such as civil aviation, the military, and the Channel Tunnel. There are two types of halon: halon 1211 (bromochlorodifluoromethane) or simply BCF used in portable fire extinguishers, and halon 1301 (bromotrifluoromethane) or BTM, present in stationary extinguishing gas installations. The ban for halon is related to the mass environmental damage that the halon causes to the ozone layer.

Fire extinguishers were mainly used in computer rooms because the halon was not harmful to electronic equipment. Halons are hydrocarbons that are halogenated, they are compressed into a liquid under pressure. The extinguishing effect is achieved by the formation of free halogen radicals in the heat of the flame, which slow down the combustion process through bonds in the flame, the radicals are also released later, so that we can speak of a (negative) catalytic reaction, as the extinguishing action of ABC powder is also called. Halon may no longer be used and such devices must be returned.

Aerosol:
Aerosol extinguishing systems extinguish with a dry aerosol. This enters into a chemical and physical reaction with the reactive molecules that are caused by fire. CO2 and H2O are normally formed. Potassium hydroxide is formed with an aerosol based on potassium. However, this substance is very corrosive to the skin and eyes. Extinguishing with an aerosol will extinguish a starting fire within seconds and prevent subsequent damage. DSPA (dry sprinkler powder aerosol), af-x fireblocker and Stat-X are examples of an aerosol extinguisher.

Operation of the 3M™ Novec™ 1230 extinguishing gas used by FSH DIRECT works on energy extraction from the source of the fire. This extraction of heat from the seat of the fire is achieved by molecular enlargement, resulting in an oxygen deficiency in the flame. This effect is also called negative catalytic. A separation therefore takes place in the chemical reaction between combustible material and oxygen. Novec ™ 1230 liquid extinguishes a fire before it starts by quickly removing heat. In a typical “total flooding system”, the agent is stored as a liquid in cylinders that are under pressure with nitrogen. By mechanical or electrical activation upon detection of the fire, the unlocking and therefore the extinguishing will take place when the fire is still in the initial phase and it will then go out in a few seconds.

The Novec™ 1230 liquid evaporates 50 times faster than water. In fact you could soak a paper book in a bath with Novec™ 1230 fluid and pick it up in one minute and read where you left off.

– Nonconductive so no short circuiting (no consequential damage)

– Leaves no residue (no cleaning costs)

– Suitable for fire classes A, B and C

– Has the “global environmental warranty – the 3M™ Blue Sky℠ Warranty”

– Does not cause extreme temperature drops such as freezing